You are here: Home / About Us / Archive & Dick Curtis 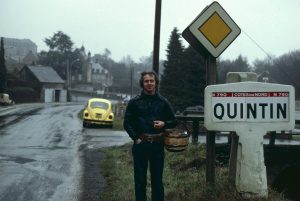 40 years man and boy: Dick Curtis joined Kynaston School as Deputy Head of Art in 1961, around 5 years after its inception. Following Francis Marshall’s retirement Dick became Head of Art and retained this position, following the merger of Quintin and Kynaston Schools in 1969, until his retirement in 1996. Dick was keen for there to be a lasting memory of the life and times of the pupils and teachers who attended the schools and this site is dedicated in his memory.

The seeds of an idea: During Dick’s last few months many happy and bittersweet conversations took place about life at the schools, old contacts and how best to address the issue of how to remember the school now that it no longer exists. Numerous ideas were suggested – most entailed the creation of documents and electronic storage media (which would ultimately end up in attics – of no benefit to us old boys and teachers, and future generations!). Finally, a website was agreed as the most permanent, and globally accessible, way to address Dick’s wishes. As there is considerable time-consuming work entailed in content research and writing, site layout, page development, image scanning, correction and ongoing maintenance, Dick’s executors were approached with a plan requiring funding a method of capturing and preserving our history. Ultimately, they (Dick!), plus some ex-pupils, kindly funded the intial development of this site.

Archive material: In addition to material amassed over the years we’ve also inherited Dick’s considerable archive. Many months have been spent sifting through boxes of photographs, documents, annual school magazines and other materials to develop the content. Some fascinating early-to-mid 1960s Parliament Hill School and North London Collegiate School magazines were also discovered – does anyone know what Dick’s connection was to these schools (a clue may be that our magazine artwork looks suspiciously similar in design to theirs?). Additionally, other material and research has taken place relating to Kynaston and Quintin Kynaston schools from the late 1970s to its more recent change to a Harris Federation “Academy”, specifically, the uninspired name: The Harris Academy St John’s Wood.