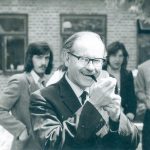 We all thought Mr. Skull was quite mad – he smoked a pipe furiously whenever possible, and he had a large harmonium in his lab which he used to play during break, pedalling away and smoking like crazy! He was also in charge of the sea scouts; I went with them once on the school boat, The Quintinian, to see the Boat Race – we arrived so late we nearly delayed the race and got shouted at through megaphones by the stewards! He was a decent old stick really though, even if he was a bit bonkers!

The harmonium was large and gothic in style and the effect was a bit like a Hammer Horror! Also The Quintinian boat was decrepit and taking on water, and it’s a wonder we didn’t sink in the middle of the Boat Race course! lol